Kootenai County Crime - Are We Safe? 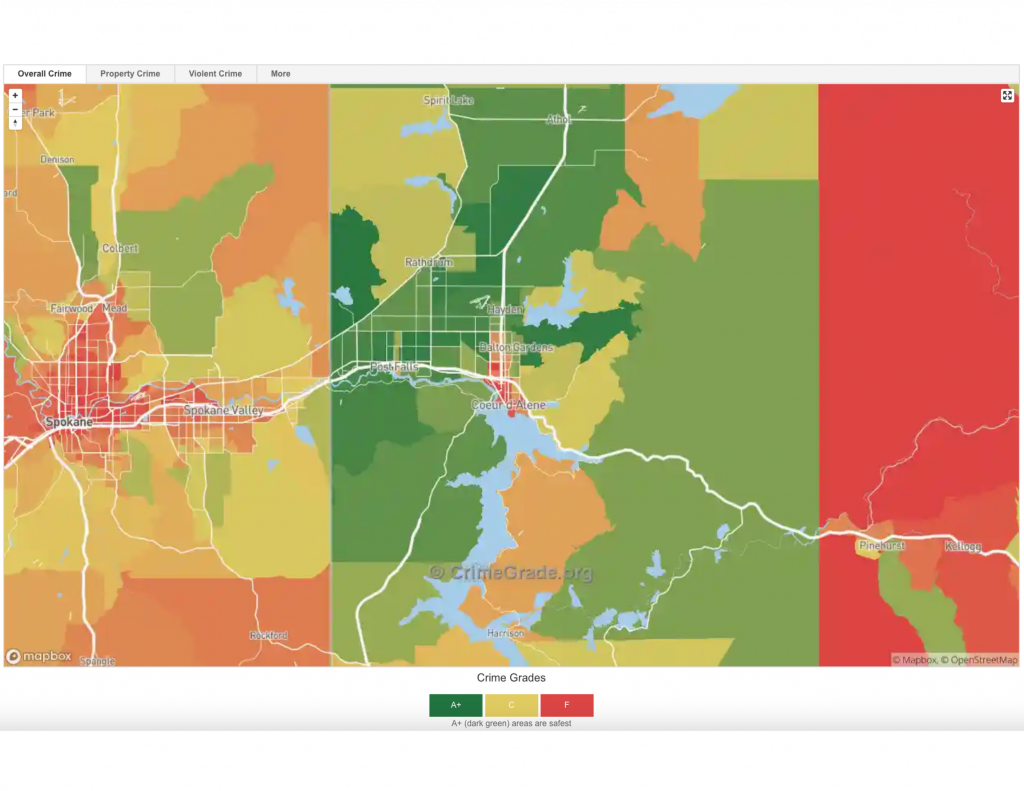 Do We Take Our Safety For Granted?

Kootenai County has been placed in the 88th percentile regarding safety. In easier terms, this means that approximately 12% of other counties are safer, while about 88% of them are more dangerous. To break it down, we really don’t have that much to worry about, says crimegrade.org. The majority of locals will tell you that the safest neighborhoods to live in are planted in the northwest region, while the neighborhoods with a higher crime rate surround the south region.

Of course when you are deciding where to reside, you want to know you’re in the safest possible area out there. While our county isn’t the safest possible area out there, we are lucky to have one of the lower crime rates around. When studying the local crime maps and looking to the news when crimes occur, a trend starts to appear. This trend shows that these rates will typically hover over the central areas, and this is for one main reason. The reason for the majority of the centralized crime is because this is where you generally find most of the shopping centers and retail establishments at. Where businesses and flowing income are, crime will likely follow. A good amount of these crimes will focus on theft rather than anything leading to violence, so the violent crimes are not focused on the central areas quite as much.

When you compare our rate to nearby counties, it makes you appreciate how safe our community truly is. While Kootenai County averages an ‘A’ rating, according to crimegrade.org, surrounding counties aren’t so lucky. One of these we all know very well, Spokane County, which averages a ‘D-’. With our rating being over three grades higher that that of Spokane County, it makes it easier to understand why we have such a high rate of people moving here in the last few years. Most of the counties in Idaho average an ‘A’ rating, just like ours, excluding Shoshone County, which has the same grade as Spokane County as stated previously.

We can also gauge the safety of our area by comparing our grade to that of those with similar size and population. Even though these counties are in various states, differing from ours, if you compare our population size to theirs, our county still holds a better grade than the large majority. We can see this comparison with the chart shown below. 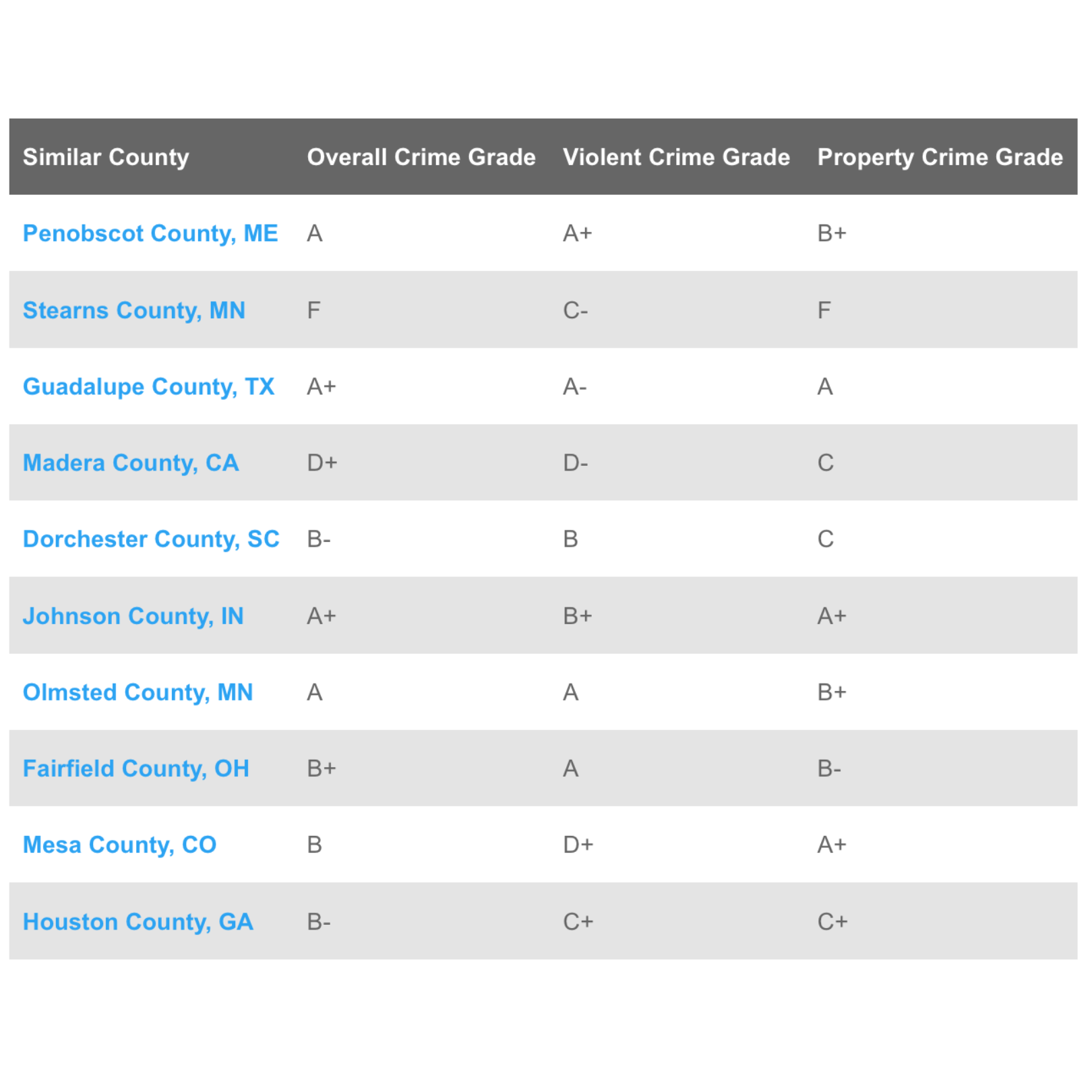 Click on the photo for more information on similar crime rates and gradings for counties similar in size and population.

Comparing to these counties similar to ours, we can see that we are above average for our overall safety. If we break it down simply to just include our crime rate, Kootenai County is actually above the standard state and national average!

Looking into crime rates by comparing population sizes by city can also be another way to gauge the best place for you and your family to call home. bestplaces.net tells us that in our county, Coeur d’Alene comes in first for the local crime rate, mostly based around the fact that the population is substantially larger than our other surrounding cities. The retail scene is also a lot more apparent in Coeur d’Alene, which brings more people; hence more crime.

Coeur d’Alene is also a large tourist destination and a hot spot for a lot of people coming from all over the world. This, of course, has its pros and cons. With more people comes more opportunity for crime. Coming in a close second is Post Falls, with the population at about half that of Coeur d’Alene and violent crimes, as of 2019, pulling in numbers of just about half of Coeur d’Alene as well. This theory seems to hold up well in this scenario, seeing how half the population brings half the amount of crimes occurring in that general region. Rathdrum is just below Post Falls, with approximately a quarter of the violent crime rates as stated above. This also holds true, as we all know that Rathdrum is a small town with much less people and businesses in comparison to the ones previously stated.

Let’s take, for instance, a comparison of Coeur d’Alene and Post Falls, two of our well known cities here in Kootenai County. As you will see below in the picture, Coeur d’Alene is higher than Post Falls around the board. As a general rule of thumb, common sense tells us that the higher populated cities, will bring more crime than those that have lower populations, so try it out for yourself, click here to compare crime rates between two cities of your choosing and see if this running theory is correct or not.

For more information on this or to compare your own cities, simply click on the picture!

As more people are migrating to our wonderful state, we can expect these crime rates to rise if we are sticking to our original theory about population affecting crime rates. Some are expecting the violent crime rates to rise substantially as well, and a lot of the locals are already noticing this shift as this is not something we have grown to be accustomed to. Only time will tell if this is just another theory, or if it’s one that holds truth.

Types of Crime Prevalent in our County

The most recent data that we have access to shows us that property crimes are at the highest that they have ever been in our area. While most of us were raised to not have to worry about our safety and would leave our doors unlocked every night, this standard is quickly changing. More and more of us are installing security systems to protect our homes, vehicles, and personal property, which is proving to be a smart move as these types of crimes are on the rise. Assault is the next up on the list, followed by rape, then robbery. Through the years, there have been a few murders here and there, but nothing prevalent enough to mention. 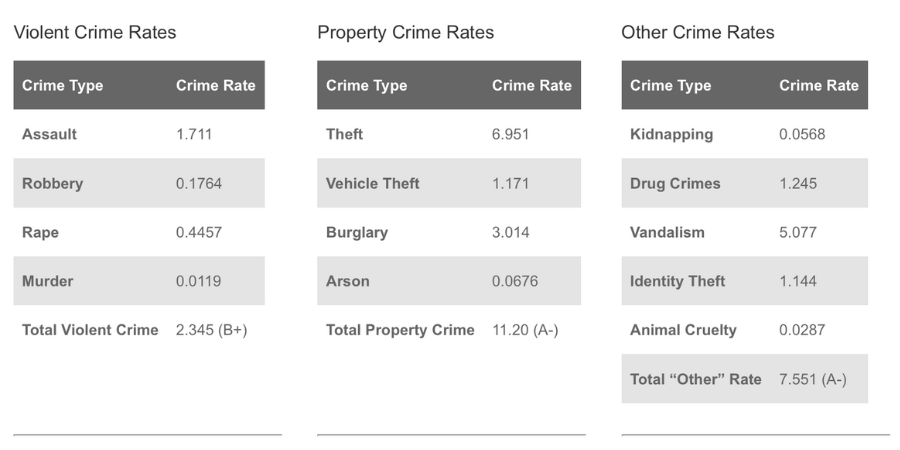 Click the photo for more information on the types of crime happening most in our area.

While crime of any sort can sound scary and overwhelming, especially when you have a family, you simply cannot avoid it. The crime rate for our area mentioned above may seem like a lot, but when you compare it to population size and similar counties, as we have shown, you will see that we live in a very low-risk area. We have seen a shift that will continue to rise as the years go by, but this is the same for any county. In the grand scheme of things, we are very lucky to live in such a safe area.

Looking to the Future

The heavy-hitting question that we all want to know is, “What path are we going down and will we see any improvement in our current crime rates?” krem.com has some uplifting information, which may just shift our perspective. They say that our crime was down over 20% two years ago and we have seen a major, almost unexpected drop in crime since then. You may be asking yourself, “Why is this happening?” They have a theory for this. After speaking to the police force, they were informed that there has been a major focus on taking known drug users off the streets, which, in turn, drops the crime rate substantially. These are typically the crimes that include petty theft, robbery, etc. Another factor affecting this excessive drop is the pandemic. This may sound silly, but the pandemic forced all of us to stay indoors and out of businesses. When there’s nobody left on the streets and nobody left to run the fair share of stores in town, how will the ‘typical’ crimes that you see happening in establishments happen? There’s only one easy answer, they DON’T!

Before you get too excited, this decrease in crime that they are referring to does account for the overall crime rate, but excludes some serious offenses like homicide and embezzlement. In short, crime is generally down, but we are seeing a shift upward when it comes to some of the more extreme crimes. The increase of cases regarding homicide may sound worrisome, but it is still int he single digits, making it very rare. Comparing to other counties, we are extremely lucky in this aspect, too, as this cannot be said for a lot of other areas out there. Like most small towns, the majority of our crime stems from financial gain, rather than the larger, more violent crimes that are committed mostly in bigger cities.

Thank you for your inquiry.